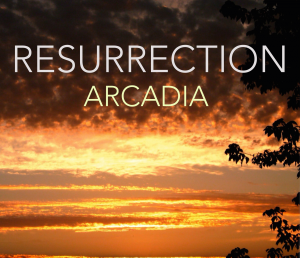 Driving southwest down I-55 and US-67 for about 2 hours from St. Louis will open your eyes to the beauty and life of a place known as the Arcadia Valley Region and Black River Recreation Area. Dubbed  “the outdoor recreation capital of Missouri”, it features three spectacular state parks, the crystal clear Black River, historic towns and villages, as well as the Fort Davidson State Historic Site.  Once a treasure trove of minerals and mining operations, the area has now seen its share of hard times through the recession along with the mineral deposits drying up.

With it's close proximity to St. Louis, Arcadia is the perfect spot for a little R&R in what could become a great “Bedroom Community” as a retreat away from the busy lives most of us lead.   To help boost awareness about the region, a group from the River Valley Region Association set up a campaign focusing on resurrecting this hidden gem.  Even though ABC's Resurrection is filmed outside of Atlanta Georgia, the show is set in Arcadia Missouri as depicted in the pilot episode airing March 9th at 9/8 CT on ABC.

The group started a campaign called “Resurrection Arcadia”. The purpose of the campaign was to partner with with ABC in order to cross promote the show and the town of Arcadia.  The campaign is off to a great start as ABC has made it possible for the people of Arcadia to attend a premiere party for the town on March 6th, to be held in the historic Arcadia Academy theater. Efforts are still ongoing to entice ABC to film future seasons of the show in Arcadia and you can help by signing the petition

But you can do more!   The Arcadia Valley is a beautiful part of our country.  A donation to the River Valley Region Association or planning your next getaway to the Arcadia Valley, can help you experience a resurrection of your own love for nature and recreation.   You can help resurrect Arcadia at the same time.   An in-depth story can be found in the St. Louis Post Dispatch, and you can learn all about the campaign at Resurrection Arcadia.