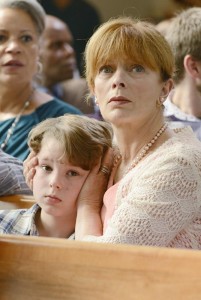 RESURRECTION – “Home” – Maggie turns to a man from her past, Dr. Eric Ward (guest star James Tupper), now working for the NIH, for answers to Arcadia's mystery. She insists Ward is there as a friend, but Bellamy is suspicious of any outsiders. Rachael's (guest star Kathleen Munroe) secret falls into the wrong hands. In the wake of recent events, Pastor Tom and Bellamy try to reassure Arcadians they have nothing to fear from the returned, but some residents have other ideas, on “Resurrection,” SUNDAY, APRIL 13 (9:00-10:01 p.m., ET) on the ABC Television Network. (ABC/Guy D'Alema)
LANDON GIMENEZ, FRANCES FISHER