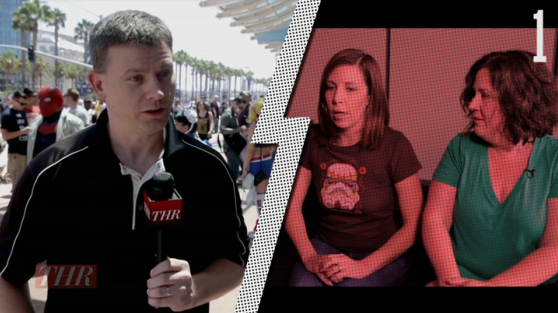 Aaron from The Hollywood Outsider, and our Resurrection super fan, went up against Michele Fazekas and Tara Butters in a trivia battle brought to you by The Hollywood Reporter.  You can test your knowledge with the question list below.  Then of course, find out how Aaron did.

1. The plot originally took place in this town, which was changed to Arcadia after a real-life shooting.

2. Who does Bellamy call in Arcadia when he learns Jacob is from there?

3. Who stops Bellamy and Jacob from leaving Arcadia at the end of season 1?

4. What was Jacob's period-accurate video game choice in the pilot?

5. When Bellamy and Maggie open Jacob's coffin, what were they particularly interested in?

6. What's one thing resurrected people have in common (as discovered by Maggie)?

7. Midway through the season, Rachel discovers this big shocker about herself.

8. All of the following were names ABC considered for the show, EXCEPT: The Returned, Forever, The Undead

9. Who used to tell each other “It's us against the world?”

10. What is N.I.H. Doctor Eric Warden's method for predicting where the next resurrected person involve?

11. How does Rachel convince some of her captors to leave?

12. What is special about Jacob's blood?

13. All of the following people returned in season 1: A soldier from the Korean War, a 1950s era African-American girl, a 1970s school teacher.

14. What do we see on Bellamy's neck in the season finale?

15. Who is the author of the book The Returned?

Did you get all 15 correct?